if you simply look at Acer’s Swift 5 laptop sitting on a desk, you’re not going to get it. Its design is terribly dull. The screen is glossy and might not get as bright as you’d like. This laptop wouldn’t strike you as particularly thin or svelte.

But then you pick it up.

The $999 Swift 5 weighs just 2.2 pounds (0.998kg), making it the lightest 15-inch laptop in the world. You’ll immediately question whether you’re holding an actual functioning laptop or some empty design mock-up. It’s very real, as you’ll immediately discover once you hit the power button and see the vivid 1080p display light up.

The classic struggle between 15-inch laptops and those with smaller screens has always been about weight and portability. My 15-inch MacBook Pro rarely leaves the house, whereas Google’s Pixelbook and my 13-inch MacBook Pro at the office are far easier to carry around without my back crying for mercy. But the Swift 5 completely blows up that way of thinking. 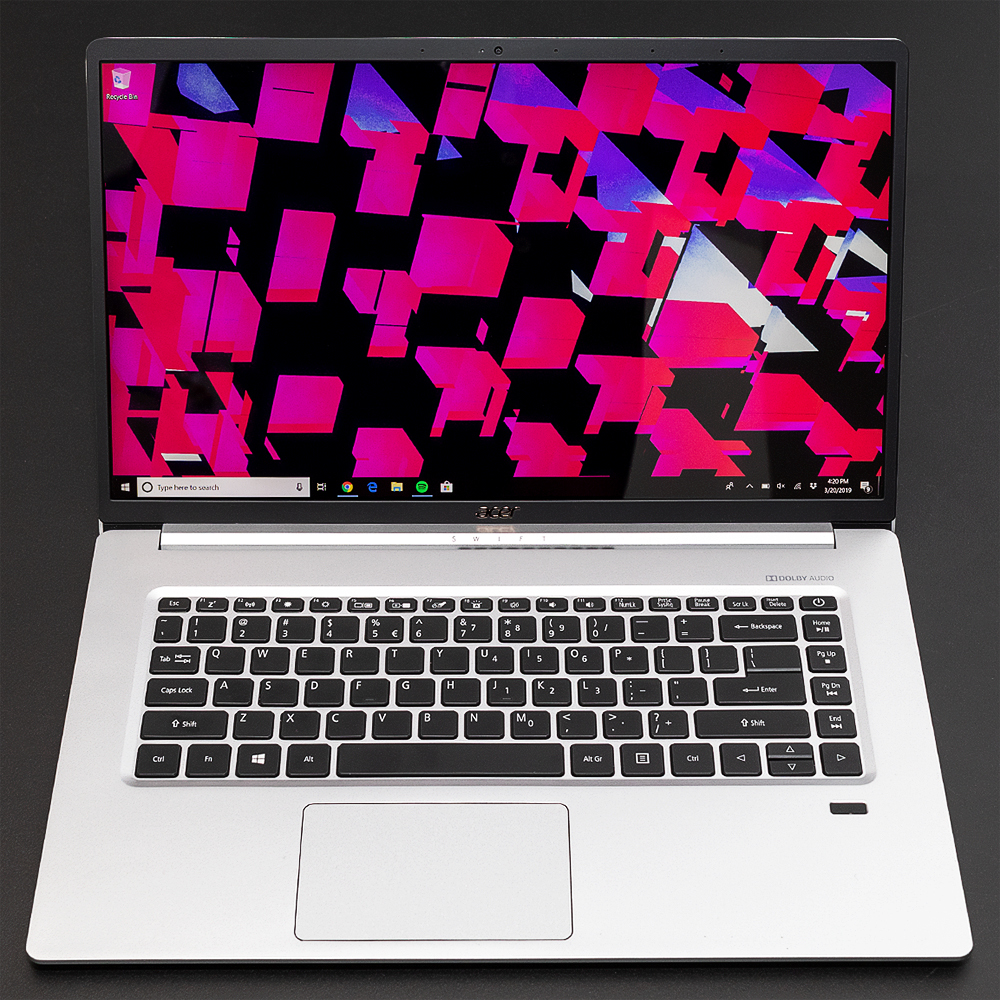 You get a large canvas for doing work, browsing the web, or watching movies without the traditional heft you’d expect. This machine is not a burden. Microsoft’s Surface Laptop 2 weighs 2.76 pounds and has a 13.5-inch screen. Dell’s XPS 13 is 2.7 pounds. Let that sink in for a minute. This 15-inch laptop weighs less than two of the best 13-inch laptops on the market. Meanwhile, the 15-inch MacBook Pro weighs in at 4.02 pounds. That’s not exactly a fair comparison; the MacBook is obviously a far more powerful tool. But it’s a useful reference for just how airy the Swift 5 feels compared to what you might be using right now.

So, how did Acer make this thing so light? Through materials and efficient engineering. The top and bottom shells of the Swift 5 are constructed from a magnesium-lithium alloy, and the keyboard casing is a magnesium-aluminum blend. The laptop feels sturdy enough in regular use, if a bit hollow. But the display will flex pretty easily if you grab it with both hands and push inward toward yourself. I’m not going to lie: you could probably easily break it if you wanted to, but I’ve seen no cause for concern. The Swift 5 survived a cross-country flight in an overpacked bag without any issues.

As I mentioned at the top, the design here is very play-it-safe and bland. Acer’s logo is on the silver lid, and the very PC-looking bottom has two downward-firing speakers, cooling vents, and a bunch of Torx screws. (You can remove the bottom plate rather easily, but all of the Swift 5’s core hardware components are unsurprisingly soldered to the motherboard and non-replaceable.) The Swift 5’s outer design is incredibly plain, and it doesn’t hold a candle to something like HP’s Spectre x360. Perhaps this bare-bones style is necessary to hit that 2.2-pound mark.

On the laptop’s left side is all of your connectivity: power, HDMI out, two USB 3.0 ports, and a single USB 3.1 Type-C port to round things out. (Acer offers power-off USB charging, so you can juice up your phone or other accessories even when the laptop is shut off.) Note that the Swift 5’s power adapter doesn’t use USB-C to charge by default, so you’ll have to carry around the included barrel plug charger unless you’ve got a wall / phone charger capable of some decent USB-C Power Delivery. If there were an SD card reader next to all of those, I’d have very few complaints about port selection. As it stands, there’s just one other: the Swift 5 doesn’t support Thunderbolt 3, so external GPUs are out of the question. You’d be right in assuming that this super-light laptop lacks discrete graphics, so it’s a far cry from any kind of gaming machine. Don’t bother with anything but the most casual titles. The right side is where you’ll find the headphone jack, security lock, and battery indicator lights.